The pulsating chatter of people enjoying themselves in a successful pool hall could be heard all through bustling Bay Street in Jacksonville. A man named Patrick Chappelle ran the LaVilla establishment — and he was good at it.

He knew how to grab people’s attention and hold it.  In fact, people would later compare Chappelle to circus founder P.T. Barnum, a showman who created the traveling spectacle that would become the “Greatest Show on Earth.”

The Jacksonville pool hall was Chappelle’s first attempt at pulling in the masses, a technique he became expert at when he created his own greatest show, the first black traveling vaudeville show.  It was unlike anything seen before it and included some of the most famous black performers of the day.

Chappelle was born in Jacksonville as the eldest son of Annie and Lewis Chappelle in the city in 1869. He was no stranger to entertaining, and at a young age he sang and played his guitar in any hotel that would allow him.

He eventually performed on a steamboat and was introduced to Benjamin Keith after a performance.  At that time, Keith and Edward F. Albee were well-known-producers of vaudeville along the East Coast and hired Chappelle to work with their show.

It was Chappelle’s first big break and where he began to learn how to run a large traveling show. 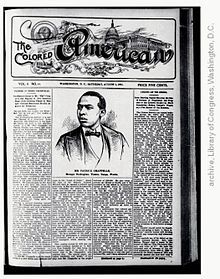 He returned to Jacksonville in 1898 with his newfound knowledge and immediately opened his first touring show, the Imperial Colored Minstrels, which traveled for a short time around the South.

A year later he and his two brothers leased a building on Bridge Street in Jacksonville and turned it into Excelsior Hall – a combination saloon and music venue. It was one of the first black-owned theaters in the South and seated 500 people.

“He promoted (Excelsior Hall) like he would a circus,” said Joel McEachin, the retired senior historic preservation planner for the city of Jacksonville. Ultimately, a disagreement with the hall’s landlord, who also happened to be the white mayor of Jacksonville, forced Chappelle to close his hall.

In 1899 Chappelle moved to Tampa and ran another concert hall, this one called The Buckingham Theater Saloon.  Once again, Chappelle began calling upon his showmanship to promote his new venture – and it paid off.

“The house is crowded to the doors every night with Cubans, Spaniards, Negroes and white people,” a 1900 article in the Freeman announced.  Soon Chappelle opened a second venue, the Mascotte Theater Saloon, also in Tampa.  And, once again, the master showman’s publicity seemed to succeed.

“These theaters have proven themselves to be miniature gold mines,” reported the Freeman.

On the heels of his two successful Tampa ventures, Chappelle took the show on the road again. He and partner, R.S. Donaldson, a successful black Florida businessman, established their own traveling vaudeville show called The Rabbit’s Foot Minstrel Company.

The idea was to offer a series of vaudeville-type acts, all cast with black performers.  Soon, the pair were running ads in the Freeman calling for 60 actors and musicians to join the traveling show.

“All members of this show must be good dressers on and off the stage,” the ad said, “and must be ladies and gentlemen.” The show gathered the cast it needed but four weeks after it opened, it was forced to close because of poor business.

After regrouping, the show was launched again but made it only 12 weeks into its traveling performances before being sent back to Tampa for a long-term engagement at one of Chappelle’s saloon-theaters.

Chappelle’s third attempt to get the show going came in 1902.  This season went better and Chappelle boasted that while his competitors could only ask 15 cents for admission to their shows, The Rabbit’s Foot Company could charge 35 cents and fill its tent.

It marked the beginning of real success for the company.  Part of that success was based upon the quality of the entertainers themselves.

For example, one of Chappelle’s singers was Gertrude Pridgett, one of the earliest black blues singers. By 1910 she had begun dating another entertainer named Will Rainey.

“They got together and became Ma and Pa Rainey a few years later,” said Ennis Davis, a Jacksonville urban planner and historian.  “Ma Rainey has been called ‘The Mother of the Blues.’ She was very popular”.

By 1904, Chappelle had purchased three Pullman cars to transport the company from city to city.  It became known as the “Leading Negro Show in America” and continued traveling and even hosted shows in Washington, D.C, and Baltimore.

In 1910, Chappelle’s health began to decline, and after his doctor told him to rest, he retreated to the Georgia countryside with his wife, Rosa.

He would still return to the tour that year, only to leave once again. His brother Lewis took over day-to-day operations and the shows still saw success in Chappelle’s absence.