The iconic words spoken by Dr. Martin Luther King Jr. during his “I Have a Dream” speech at the historic March on Washington in 1963 called for a future of equality for all people, regardless of race.

The words have become globally known touchstones for all oppressed people.

What many people don’t know is that the speech might have occurred in a much different environment if it hadn’t been for a Jacksonville native named Asa Philip Randolph.

Randolph, more commonly called A. Philip Randolph, was one of the main organizers of the March on Washington and a giant in the civil rights movement. He wasn’t always strictly focused on civil rights however.

Born in Crescent City on April 15, 1889, Randolph was the son of a traveling minister with the African Methodist Episcopal Church. In 1891, when Randolph was 2, the family moved to Jacksonville, where he would spend the rest of his childhood.

There were two main incidents in Jacksonville that would influence Randolph’s eventual transition into a civil rights activist, said Ennis Davis, an urban planner and local historian.

One incident stemmed from his father’s side job as a tailor.

Randolph had accompanied his father to a local saw mill to drop off some clothing. When the owner of the mill, a white man, saw that Randolph and his father were black, he told them to leave immediately or the police would be called. He also told them to take the finished clothes somewhere else.

Davis said that the look of embarrassment on his father’s face made Randolph especially sensitive to any kind of bigotry.

The other incident that influenced Randolph as a child involved a man arrested and taken to the Duval County Jail.

Randolph’s mother and father, upon hearing that a mob was headed to the jail to lynch the man, took action themselves. His mother sat in the front room of their home on Jessie Street with a shotgun, prepared to defend the home if necessary. His father took a pistol and helped lead a group of armed blacks to surround the jail, forcing the white lynch mob to back down.

“That was certainly a dangerous move by his father since there were still regular lynchings and things like that going on in the area,” Davis said. “But there’s strength in numbers and that was really the only way they could have prevented the man at the jail from being lynched.”

Davis said the incident taught Randolph that although there are peaceful ways to protest, people should be ready and able to defend themselves with force if necessary. Perhaps even more importantly, it taught him that in the face of adversity people’s chances of success are greater if they are well organized and surrounded by others.

“It was certainly a militant approach to a problem,” Davis said, “but that’s what helped Randolph realize that sometimes force was necessary to achieve a goal.”

There he would excel in drama and public speaking, while also playing baseball and singing in the choir. Randolph graduated in 1907 as the class valedictorian.

After graduating, Randolph worked odd jobs around Jacksonville while also singing, acting and giving public readings. Finding that he was limited to jobs that involved manual labor in Jacksonville, Randolph moved to New York City in 1911.

“We don’t really know where he tried to get work in Jacksonville before leaving for New York,” Davis said. “But anywhere in the South it was difficult for a black man to find work in the areas that Randolph was interested in.”

Shortly after moving to New York, Randolph joined a theater group that performed primarily the works of Shakespeare. While performing with the group, he met Lucille Campbell Green, a fellow performer. The two married in 1913.

It was also in New York where Randolph’s interest in politics took off. While working jobs that included elevator operator, porter and waiter, Randolph attended the City College of New York for social sciences. He joined the Socialist Party and campaigned for the party on the corner of 135th Street and Lenox Avenue, also known as Harlem’s soapbox corner.

Randolph joined forces with Chandler Owen to begin editing and publishing The Messenger, a monthly magazine for African-Americans.

The views expressed in The Messenger were often controversial and even led to Randolph and Owen being arrested for putting antiwar ideas in the magazine in 1918 during World War I. At that time, the Department of Justice called The Messenger “the most able and most dangerous of all the Negro publications.”

An example of what made The Messenger so dangerous in the eyes of the government is an excerpt from November 1917. In an editorial, Randolph decried the complacency of blacks in accepting lesser political offices rather than pushing for more influential positions.

“The New Negro does not only demand appointment but he, primarily, demands a place in the law-making bodies of the city, state and nation. He demands the right to determine the kind and amount of taxation. He demands better and more schools for his children. He demands cleaner streets. He demands police protection. In short, he demands every privilege and right accorded to citizens and men under the constitution.”

In an era of Jim Crow laws and segregation, opinions like Randolph’s were startling and provocative.

Randolph also first entered the world of labor organization in 1917 by founding a union of elevator operators in New York. He also became the president of the National Brotherhood of Workers of America, a union of black shipyard and dock workers in Virginia. That union lasted two years before pressure from the American Federation of Labor forced its dissolution.

To Randolph, the inclusion of blacks in labor unions was just another facet of the civil rights movement.

“The essence of trade unionism is social uplift,” he once said. “The labor movement has been the haven for the dispossessed, the despised, the neglected, the downtrodden, the poor.”

Randolph was elected president of the union in 1925 and within a year, the Brotherhood had enrolled 51 percent of the porters within the company. Unfortunately, by 1933, due to perceived ineffectiveness, including an abandoned strike, membership had drastically declined.

Randolph rode out the rough time for the organization long enough to see its return to prominence. In 1935 the Pullman Company began negotiations with the Brotherhood and a contract agreement was reached in 1937 that saw massive increases in pay, shorter work weeks and overtime pay.

Due to his association and success with the Brotherhood and other labor organizations, Randolph became one of the most visible and outspoken members of the civil rights movement.

Racial justice, he once said, must be won.

“It is exacted and the struggle must be continuous for freedom is never a final fact, but a continuing evolving process to higher and higher levels of human, social, economic, political and religious relationship.”

A march on Washington was proposed by Randolph and two others in 1941 to protest a number of racial issues, many centered on the defense industry. That march was cancelled after the passing of the Fair Employment Act of President Franklin D. Roosevelt, which was viewed as a major early victory in the civil rights movement.

Randolph didn’t rest on his past victories however. He began a campaign against discrimination in the military, war industries, government agencies and labor unions in 1942. The beginning of the campaign saw roughly 18,000 blacks gather at Madison Square Garden. 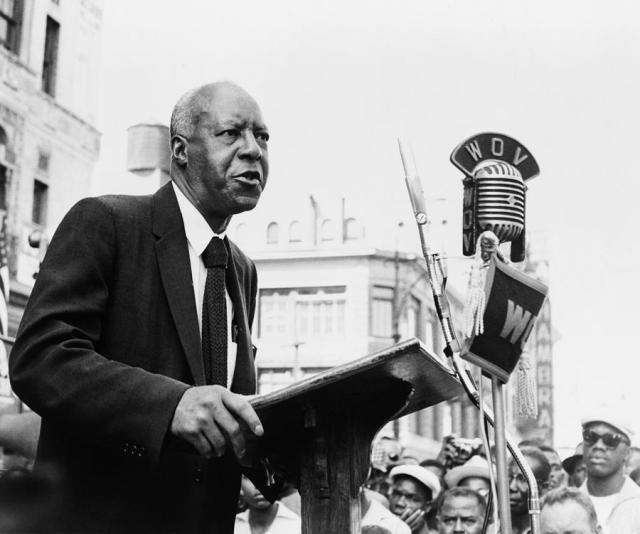 In 1944, the government supported black workers during the Philadelphia transit strike in their quest to gain positions that were previously limited to white employees. It was another major victory for blacks and the civil rights movement.

Randolph, along with other activists, continued their push for the rights of blacks, particularly in the armed services. In 1947, Randolph and Grant Reynolds formed the Committee Against Jim Crow in Military Service, later known as the League for Non-Violent Civil Disobedience.

“We want the full works of citizenship with no reservations,” he stated. “We will accept nothing less.”

Randolph urged young blacks not to register for President Harry Truman’s proposed peacetime draft law. The threat of losing the support of so many blacks saw President Truman back down on the proposed law. In 1948 he abolished racial segregation in the armed forces.

In 1950, Randolph helped found the Leadership Conference on Civil Rights, which has coordinated national legislative campaigns for every major civil rights law since 1957.

1957 was also the year that saw Randolph and Bayard Rustin, another prominent civil rights leader and pacifist, align themselves with Martin Luther King Jr. Randolph helped organize the Prayer Pilgrimage for Freedom alongside King in response to resistance to Brown v. Board of Education. He also organized Youth Marches for Integrated Schools in Washington, DC in 1958 and 1959.

While organizing those marches, Randolph helped arrange for Rustin to teach King how to organize peaceful demonstrations in Alabama.  But he still dreamed of organizing a march on the nation’s capital.

“I suggest that 10,000 Negroes march on Washington, D.C., the capital of the nation, with the slogan, ‘We loyal Negro American citizens demand the right to work and fight for our country.’”

The march was a pivotal point in the civil rights movement as it highlighted the juxtaposition between race and economic disparity.

Randolph died in 1979 in New York City but his memory lives on throughout the country in the form of a museum, schools, street names and even a train car.

The A. Philip Randolph Career Academies is named after Randolph and features not only advanced placement and duel enrollment programs, but multiple academies focused on career paths as well.

But more than any building or statue, it is Randolph’s message that helps his memory to live on and influence the new leaders of today.

“Justice is never given; it is exacted and the struggle must be continuous for freedom is never a final fact, but a continuing evolving process to higher and higher levels of human, social, economic, political and religious relationship.”